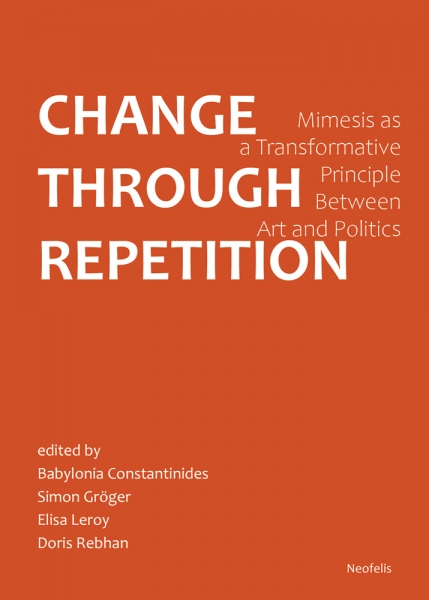 Beschreibung Beiträger*innen
Beschreibung
Art and politics are related through repetition. Both realms are structured by practices of... mehr
Menü schließen

Exploring the transformative potential of repetition in ‘political art’

Art and politics are related through repetition. Both realms are structured by practices of repetition and share a common room of sens(e)uality – aesthetics in the emphatic sense of the word. It is the aesthetics and practices of repetition that reveal the relation between both realms. This volume proposes to explore aesthetic and cultural phenomena that effect change in the non-aesthetical realm, not so much in spite, but precisely because of their being ‘mere’ repetitions.

Repetition shapes art works through procedures and processes of reproduction, copying, depiction, or reenactment. As representation of the world, mimetic art’s relationship to the political and social world can be conceived as repetition. When can mimetic works of art nonetheless become a trigger, participant in or vehicle for political and social transformation? How do mimetic practices as diverse as those of the Research Institute Forensic Architecture, the theater of Milo Rau, video installations with found footage from social media and the fictional NSK State address and change regimes of visibility? How can practices such as performative gender constitution and propaganda, which (ostensibly) affirm regimes of visibility, be understood as processes of change through repetition? How do commemorative cultures and practices of documentation interrelate? How is historical reality produced through mimesis with a view to an imaginary political future?

By exploring works of art from a wide range of historical periods, places, media and contexts – from the political thought hidden in Hegel’s Aesthetics through Hélène Cixous’s practice of writing difference(s), from contemporary applied theater through the Gezi Park Uprising in 2013, and from installations of fictional national museums through to the artistic commemoration of assassinated political activists in Iran – all contributions in this volume attempt to show how a concept of change through repetition can help redefine the relationship between art and politics and to enlighten us on the transformative potential of repetition in ‘political art’.

In recent years, much research has been dedicated to the relationship between politics and aesthetics and, in particular, to the political power of aesthetics. This book makes a claim for what comes before any political decision is...
150 Seiten, Softcover – 18,00 €
Dimensionen des Politischen Ansprüche und Herausforderungen der Empirischen Kulturwissenschaft